Aller au contenu principal
Luca Brandt is professor in Fluid Mechanics at the Royal Institute of Technology (KTH), Stockholm, Sweden since 2012 and at the Department of Energy and Process Engineering, NTNU, Trondheim, Norway since 2021. He received a Masters in Mechanical Engineering from University of Rome, La Sapienza in 1997, and PhD in Fluid Mechanics at KTH in 2003. Before joining KTH as assistant professor he spent several months at Ecole Polytechnique, Palaiseau, France and at the University of Bologna, Italy. Luca’s research interests are in the general area of multiphase turbulence, particle laden flows, heat and mass transfer, low-Reynolds-number flows and complex fluids, hydrodynamic instabilities and flow control, with focus on the development of theoretical models and high-fidelity numerical simulations. He has more than 180 peer-reviewed journal papers including 1 Annual Review Fluid Mechanics in 2022. He was the recipient of an ERC consolidator grant to study particle suspensions in 2013 and of the "outstanding young researcher" award from the Swedish Research Council in 2014. He had been awarded the G. Gustafsson prize in 2005 and the position as outstanding researcher in Mechanics by the Swedish Research Council in 2008. Luca has served the community organizing several workshops and summer schools and is associated editor of the European Journal of Mechanics/B and of MECCANICA.

Abstract: Emulsions are multiphase flows of two immiscible (totally or partially) liquid phases with similar densities. Such flows are extremely common in industrial applications and environmental flows. The problem is addressed here via direct numerical simulations, where the volume of fluid is used to represent the complex features of the liquid–liquid interface. We consider a mixture of two iso-density fluids and vary the volume fraction of the dispersed phase, the viscosity ratio and the surface tension coefficient to study the turbulence modulation. We examine integral quantities and the spectral scale-by-scale analysis, and demonstrate that energy is transported consistently from
large to small scales by the interfacial stresses, and no inverse cascade is observed. Furthermore, the total surface is found to be directly proportional to the amount of energy transported, while viscosity and surface tension alter the dynamic that regulates energy transport. We also observe the −10/3 and −3/2 scaling on droplet size distributions and demonstrate that the cross-over length scale, the so-called Hinze scale, introduced on dimensional consideration and empirical fitting, can be precisely identified as the scale at which the net energy exchange due to capillarity is zero. Droplets larger than the Hinze scale preferentially break up, thus absorbing energy from the flow; droplet smaller than this scale, instead, tend to coalesce to minimize the free energy, thus releasing energy to the flow. 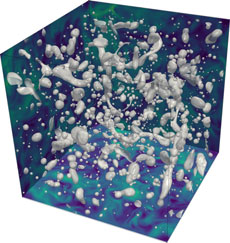 A Descent Into The Maelstrom or Analogue Gravity (Black Holes, Wormholes and White Fountains) in Hydrodynamics

Germain Rousseaux is a Physicist with a strong interest in interdisciplinary studies. He is interested in physical analogies à la Clerk-Maxwell. His main research topics are physical hydrodynamics, relativities (special and general), classical electromagnetism, granular physics and nonlinear physics. He obtained his PhD at ESPCI Paris in 2003. After several post-doctoral positions at the University of Nice and ULB (Belgium), he joined the CNRS in 2007. Germain Rousseaux is currently CNRS Research Director at the Pprime Institute in Poitiers where he is co-leader of the Curiosity team.